Do you seem to be tired all the time, even after you’ve had a full night’s sleep? Do you feel stiff every morning? Do you ache all over? Do you get frequent headaches?

These symptoms could be the result of stress. However, if you experience these feelings over a long period of time, it could indicate that you have a condition called fibromyalgia.

Because the symptoms are so common, many people go undiagnosed for years with this increasingly prevalent chronic pain disorder. Next to osteoarthritis, fibromyalgia is the most common rheumatic disease. It affects approximately 2% of the population and it is estimated that up to 20% of patients that see a rheumatologist (a doctor specializing in arthritis) are suffering from fibromyalgia. 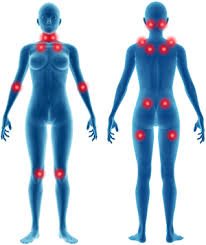 This condition is sometimes referred to as fibrositis or fibromyositis. It usually affects women between the ages of 20 and 50. It’s a syndrome that causes chronic, sometimes debilitating muscle pain. The pain usually occurs where muscles attach to bone and is similar to the pain of arthritis. The good news is that the joints themselves are not affected. The joints do not deteriorate or become deformed as they do in some types of arthritis.

Pain is the most prominent symptom. It usually occurs in the neck, shoulders and back. People with fibromyalgia describe the pain in many ways. Some people report a stiff, aching feeling. Others describe a burning, stabbing, gnawing or radiating pain.

Pain isn’t the only symptom. Many people also experience generalized stiffness. Remaining in one position for extended periods of time, for example sitting for a long car ride, can increase the stiffness. For this reason, it seems to be worse first thing in the morning.

Fatigue is another almost universal symptom. About 90% of sufferers report moderate to severe fatigue. They feel a lack of energy, less endurance with exercise, or the kind of exhaustion associated with the flu or lack of sleep. This can interfere with concentration. Even simple mental tasks can seem extremely difficult.

Other common symptoms include swelling, tender points, headaches, insomnia, depression and neurological problems like numbness and tingling in the limbs.

Fibromyalgia is very difficult to diagnose because the symptoms mimic those of stress and other diseases. To add to the problem, there is no definitive laboratory test that can be done to confirm that you have the condition.

Because the diagnosis is made primarily on the basis of the reported symptoms, people with fibromyalgia are often led to believe that it’s all in their heads and that nothing is wrong.

What are the symptoms of Coronavirus COVID-19? Symptoms can range from mild to severe illness. S[...]

Just two weeks of normal office life without exercise can put people on the path to diabete[...]

The Dangers Of Sitting

This is a really interesting article form the Health and Living supplement of the Irish Independent:[...]

Cutting the Cost of Your Treatment

At Premier Physical Therapy Clinic I aim to keep our fees as low as possible, providing you with pro[...]